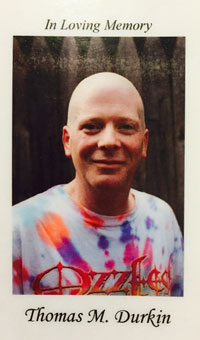 ce 2015 we have dedicated our cause to the memory of our dear friend who was a
tireless supporter since we began this Benefit:

Mr. Tommy Durkin (1970 - 2015)
Well, we've decided to dedicate THIS year's Blank-Fest XX show to his memory as well -
if you knew him you'd know why this is a 'no-brainer' - Tommy's support and dedication
to the cause over the years is one of the reasons why this show has made it to Year 20.
He will always live on in our hearts and he will always rock hard in our fondest memories.

Thank you, Tommy for always being there.  We love you!

A Special Message
2020 Line Up
Thanks To